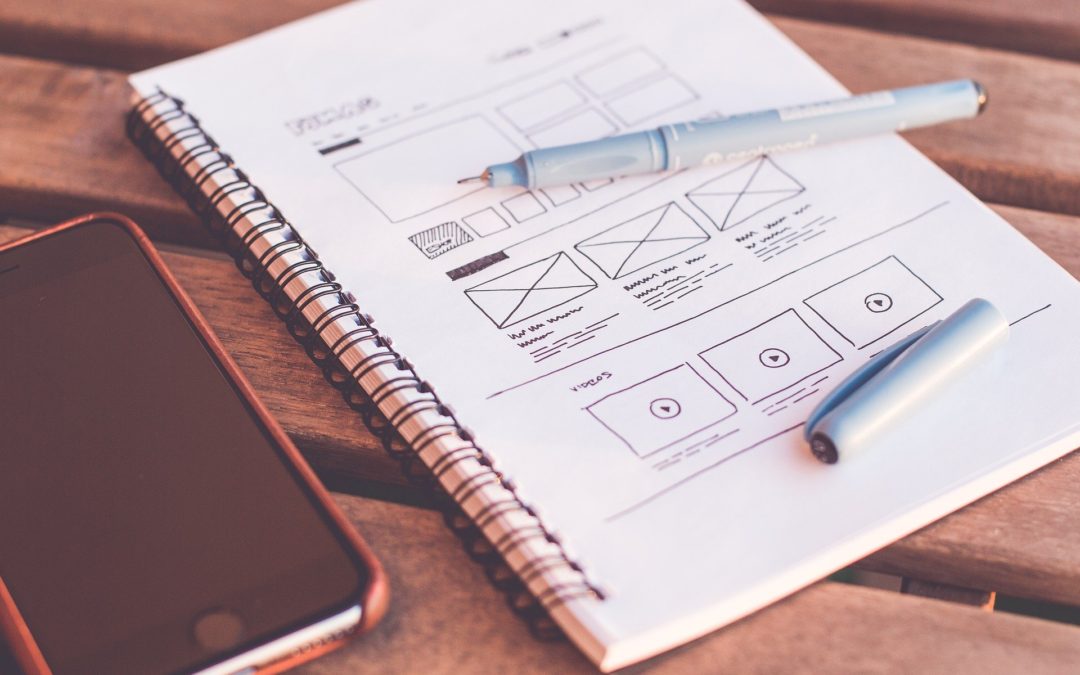 In this section, we will cover the steps required to properly document your Swift Package so any developer using your Framework knows how to properly implement it.

As I stated in the first part of the series, I found much of the information for this article scattered throughout the internet, so another point of this article is to pull it all together in one place. I’ll give credit and link back to the original source articles, so you can look at different ways of structuring your projects to fit your own needs.

Why Should I Provide Documentation?

Good documentation for any Framework is critical not only for other developers consuming your library, but for any developer that needs to maintain the Framework in the future… including the initial developer, you.

I don’t know how many times I’ve had to maintain a piece of code that I have written months, or years, earlier and wondered why I had coded something a specific way. Additionally, I’ve had to use a Framework I had written some time ago and had to rely on my comments and documentation to correctly implement it.

While Self-Documenting Code helps another developer be able to understand, use and maintain your Framework, clean, well thought out Code Comments and additional documentation (such as the README.md file) are an absolutely necessity.

What types of Documentation is Required?

At the very least, you should be including a good README.md file in Markdown that defines the following:

Additionally, you should provide Code Comments for every public element that the Framework exposes. Using either Jazzy or Apple’s DocC tools, you’ll want to convert these comments into API Documentation that any consuming developer can reference to properly implement your Framework in one of their projects.

For very complex Frameworks, with lot’s of moving parts, you might want to include additional Read Me style documents in Markdown, that cover specific functionality in detail. As we have done here for our SwiftletUtilities package:

Remember, you have intimate knowledge of why you created a Framework a certain way and how to use the Framework in another project, that another developer will not have. As a rule of thumb, just because it makes sense to you doesn’t mean it will make sense to someone else.

This is where good documentation comes in and why it is critical.

As I stated above, a good Read Me file is critical because it’s the first exposure that a potential user of your Framework has. It should cleanly and quickly tell a developer what your Framework does, what OSes it supports and how to consume it.

As an example, here’s the README.md file from our CircularProgressGauge package:

This documentation can be broken down into the following sections:

Including Images in your Documentation

If you want to include images in your README.md file (or any other documentation). I suggest including an Images directory in the Documentation folder and placing all of your images there. For example: 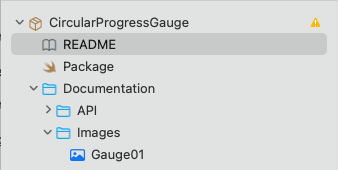 Which can be referenced in your Markdown files as:

For every member that your Framework exposes, you should be providing Markup Code Comments that we will be converting into API Documentation later.

For example, here is the main comment for our CircularProgressGauge package:

This comment provides a short description, an example call and general remarks about calling the function. Here is another function that also includes documentation for the parameters the function takes:

PRO TIP: If you place your cursor on or just above any non commented member in Xcode and select the Editor > Structure > Add Documentation menu item (or use the Keyboard Shortcut: Option-Command-/), Xcode will automatically add a template for the member will all of the elements ready for you to fill out.

As of the writing of this article, there are two options for generating API Documentation from your Markup Code Comments:

Currently, DocC is in Beta and has a few quirks when being used to document a Framework. As a result, we are still relying on Jazzy and that’s what I’ll be covering in the rest of this document.

As DocC matures, I’ll update this article to reflect using DocC instead of Jazzy.

You’ll need to install the Jazzy tooling before you continue. Again, I’d suggest reading APPCODA’s excellent Documenting Your Swift Code in Xcode Using Markdown article. They have a detail description of doing the install.

That said, the simple steps are:

NOTE: It can take awhile for the install to kickoff and finish, so be patient. You’ll get feedback when the install finishes.

To make it easier to initially generate the API Documentation and to recreate it whenever the Framework has been updated, I add a standardized BuildApiDocs.sh file to all of my Frameworks.

As an example, here’s the BuildApiDocs.sh file from our SwiftletUtilities package:

For any new project I add this script to there are three macros that need to be adjusted:

Before the BuildApiDocs.sh file can be run for the first time, you’ll need to make the file executable. Do the following:

To run the BuildApiDocs.sh file and generate the API Documentation do the following:

After Jazzy has finished building your API Documentation, you can navigate to the Documentation > API folder inside of you Framework’s Project Folder and double-click the index.html file to open it in your web browser: 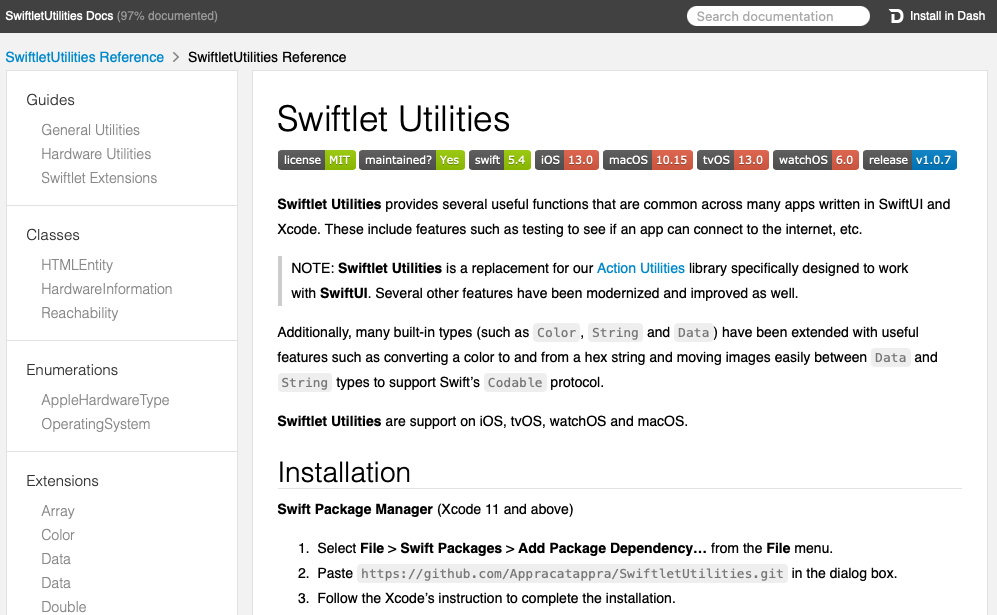 Selecting any member item will show details like the following: 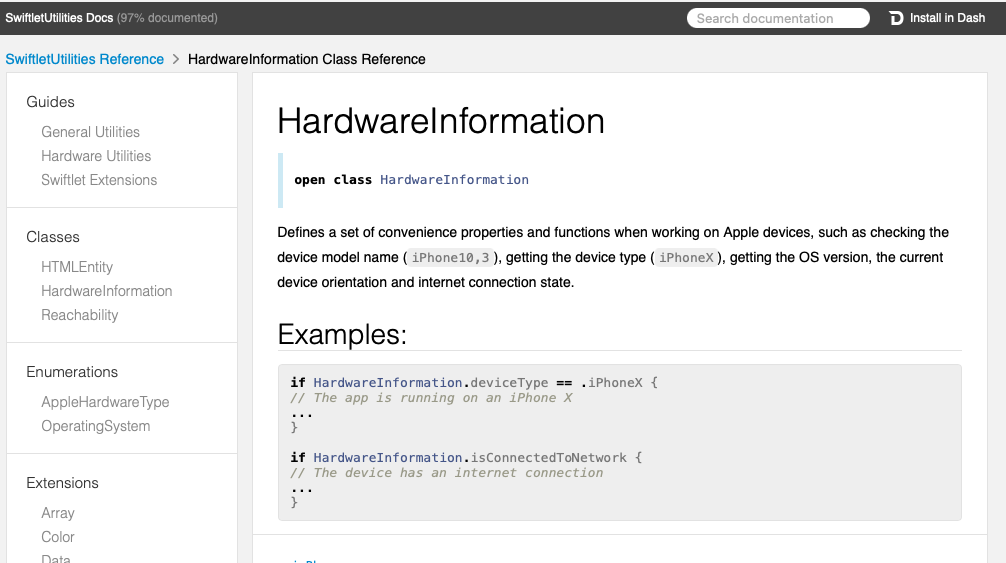 The third and final part of the series, Releasing and Versioning Your Swift Package, will cover to step to release your Swift Package on GitHub and how to set and maintain the version of the Framework.