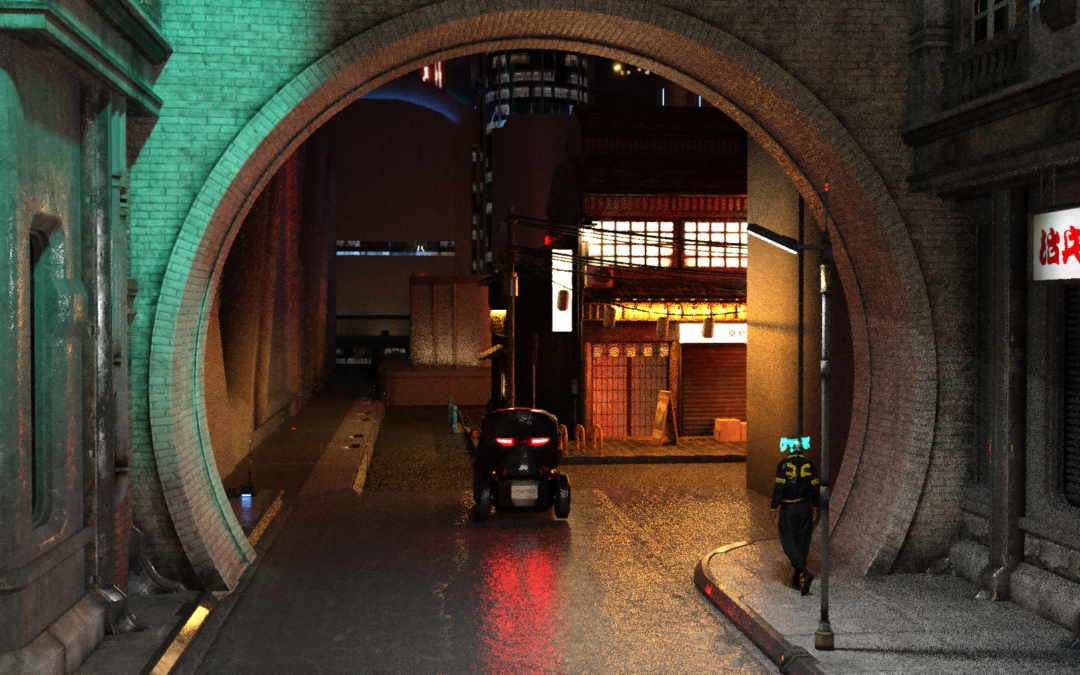 Today, I thought I’d give a quick update on what I’ve been working on and show off the new game I’m busy building. It’s a Cyberpunk/Cybernoir thriller that unfolds as an interactive manga/graphic novel called Reed/Wright Cycle.

Set in a future where cybernetic augmentation of the human body is the norm, you play as a fully cybernetic private detective trying to solve a case of corporate espionage.

The game features lush, detailed graphics set in an 80’s style cyberpunk world. When completed, you will have more that twenty unique locations that you can visit, explore and interact with.

Reed/Wright Cycle is currently in open beta via TestFlight for iPhone, iPad and Apple TV (with a required extended MFi Gamepad). We’d love to get your feedback and help make the game better. You can join the public beta here: https://testflight.apple.com/join/7SfToPrc

The game UI is presented in the style of an 80’s graphic novel/manga where there are three distinct modes of gameplay:

Here’s an example of a Manga Page, these are the opening pages of the game:

Here’s an example of a Multi-Choice Dialog, working with the computer in your office:

Here’s an example of 3D Exploration in the game, exploring the crime scene:

The game features lushly rendered, highly detailed graphics that are set to match the cinematic style of several of my favorite cyberpunk movies such as Blade Runner, Ghost in the Shell and Netflix’s Altered Carbon.

Most of the imagery was rendered in Daz Studio on an M1 based Mac Studio computer. Daz 3D has been a lifesaver allowing me to purchase high quality 3D content at a veryreasonable rate and kit bash multiple purchases (along with custom 3D models, Materials and Textures) to bring this world alive.

As an indie developer, having access to Daz is like having my own team of graphics artist. A game of this size and scope wouldn’t be possible for me otherwise. You really should check them out!

Stay tuned for more future details and possible public betas. I’d love to get you feedback, so hit me up @KevinAtAppra on Twitter.