Getting Started with Action Sliders

To use an Action Slider in your mobile application include the ActionComponents.dll library and reference the following using statement in your C# code:

The Action Slider is designed to be oriented vertically (taller rather than wider), with the 0% position at the bottom of the control and the 100% at the top:

Additionally, the Action Slider needs to be a minimum of 50 pixels wide. Failing to honor either of these conditions will result in the control rendering and/or behaving incorrectly.

Action Slider was designed to look and function the same across platforms, however you have full control over its look and feel. Action Slider is fully customizable with user definable appearances for every element of its UI. You can make adjust the following properties to control the appearance:

Any change to the above properties will cause the Action Slider to instantly redraw and reflect the change.

Action Slider includes a fully documented API with comments for every feature. The ActionAlert‘s user interface is drawn with vectors and is fully resolution independent. Additionally, an Action Slider can be added to an app’s .storyboard (iOS) or .axml(Android) file at design time or added to the UI programmatically at runtime.

Use the FillPercent property to get or set the amount that the control is filled from 0% to 100%. As the percent is increased, the control will fill from bottom to top.

The user can interact with an Action Slider in one of two ways:

Based on the type of interaction, the ValueChanged, Touched, Moved and/or Released events will be raised in response.

In this example, an ACSlider has been added to the app’s Main.storyboard file and exposed via the brightnessSlider outlet along with a fillPercent label:

And here is the same example Action Alerts created in the OnCreate method of an Android Activity: 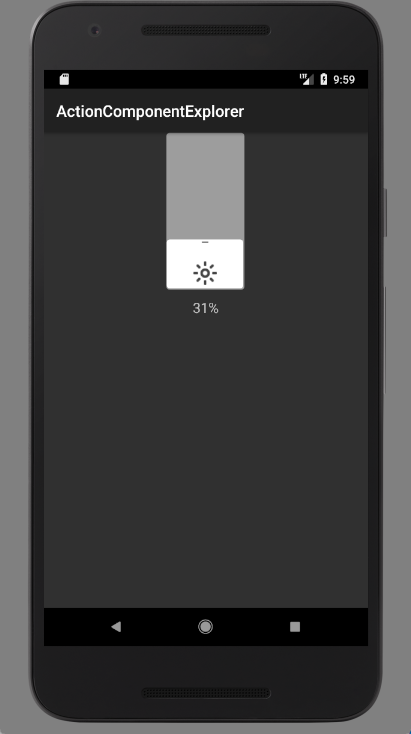 The Trial version of Action Slider is fully functional but includes a Toast style popup. The fully licensed version removes this popup.